Many companies face a great deal of pressure in initiating and completing projects and in streamlining the company’s processes. In addition, management often want their employees to increase their competencies at the same time.

Statement by a manager at Systematic A/S: “Every time a colleague completes a project, he/she must be more valuable to us.”

HOW DO YOU INCREASE THE COMPANY’S EFFICIENCY AND ITS EMPLOYEES’ COMPETENCIES AT THE SAME TIME?

Modern companies require efficiency and profitability in a world where competition constantly increases. This means you need to choose efficient methods and effective tools along the way, to ensure that the company remains efficient and that employees thrive, which in turn increases competitiveness.

We provide a number of services that can support your company in many ways:

First, the project is effectively estimated via the Successive Principle, i.e. the project deliverables are budgeted.

Next, the group makes a project plan, in a very basic and practical way using Post-it sticky notes on a wide poster, where the project participants across the professional groups set out the duration of the deliverables.

Lastly, the deliverables are moved around, so that the project participants are allocated optimally during the process.

In many cases this has proven to be efficient, gives ownership and motivates the project team. 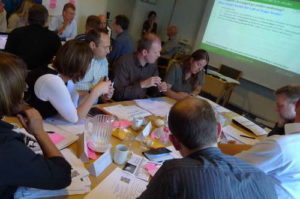 Many different types of companies discover that budgets and plans go awry, and it happens often with major public sector construction projects and IT projects.

The Norwegian Government has made it compulsory by law that all major public sector projects must be estimated using the Successive Principle (known in Norway as ‘Anslagsmetoden’). This has meant that up to 80% of major tunnel, motorway and IT Infrastructure projects have complied with their budgets and stayed within their deadlines – compared to the previous figure of 10–20%!

Norwegian AF Gruppen, a major contracting and industrial group introduced the method in 2006. After three years, the group had increased its EBIT from 2.5 % to 5.8 %, primarily because of the method, while at the same time the group doubled its profits. Extremely thought-provoking stuff! This should inspire the senior management and company directors of any company.

Find out more or adjust your settings.

This website uses cookies so that we can give you the best possible user experience. Cookie information is stored in your browser and performs tasks such as recognizing you when you return to our website. Just as they are used to gain insight into which parts of website you find most interesting and useful.

Required cookies must be allowed at all times so that we can store and store your preferred settings for the use of cookies.

If you do not allow this cookie, we will not be able to save your preferred settings for the use of cookies.

This means that with each new visit to the website, you must again specify settings for permitted and non-permitted cookies.

This website uses Google Analytics to collect anonymous information such as the number of visitors to the site, and the most popular pages.

Start by changing the setting to ´Allowed´for necessary cookies, so that we can save your preferred settings for the use of cookies.

Start by changing the setting to ´Allowed´for necessary cookies, so that we can save your preferred settings for the use of cookies.